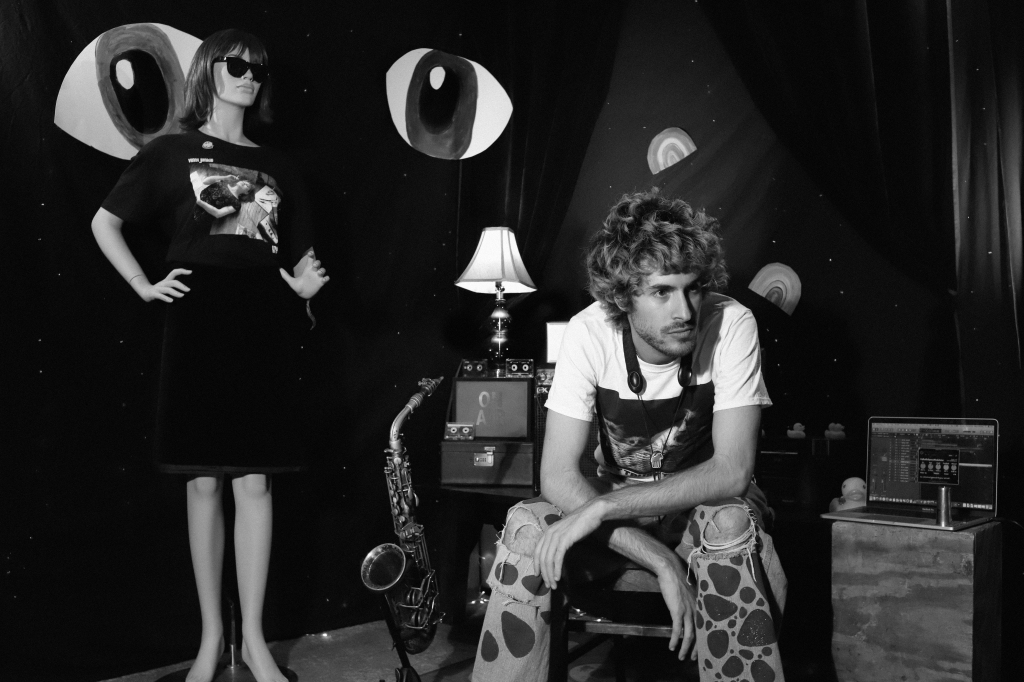 Henry Solomon, a talented sax player with a bleached blonde fro and very cool pants is a musician originally from the bay area in Northern California, who studied all things music and composition at USC’s Thornton School of Music. Growing up in a very musical and artistic environment, Henry went to an arts high school and learned to play piano when he was just six years old, an activity encouraged by his mother who is also a musician. Although he loves to play sax, he claims that he now enjoys writing more, saying “I guess it took me a while to realize that the music I loved listening to was music I could be trying to make, rather than be something separate from what my musical life was. I had this idea that if it didn’t have saxophone or something then I couldn’t be a part of it. But lately I’ve been able to start breaking that down and be way more free with music making and not rely on the saxophone so heavily.” Although Solomon prefers writing to playing at the moment, sax is still his instrument of choice.

As for Henry’s musical career, there doesn’t seem to be many restrictions regarding his future and his boundless outlook on music aids this immensely, which is also something that you can hear ever so clearly in his newly released album “Night Time Head Crunch.” His funky and transcendental sound can not only be heard, but also seen and interpreted through his album art, which he designs himself. Ultimately, it seems as though he enjoys every aspect of the album making experience, diving in head first, showing extreme versatility. From playing to writing, Solomon is still trying new things and figuring out what his future in the music industry looks like. As he puts it, “…I knew I wanted to play music forever but I didn’t really know what it was going to look like. I’m still figuring that out day by day, letting go of expectations and trying to let myself be more open to new things.”

Solomon currently resides in Los Angeles, California and thoroughly enjoys the music seen out there and as he explains it, “It feels very freeing and open and people don’t seem to judge each other as much as  New York or Paris or wherever. You can be involved in a lot of different styles of music and it’s not a big deal.” He is no stranger to live performances as well. Although Henry just released his first album, the start off to his solo career, he has played sax in the band ‘THUMPASAURUS’ for the past few years. He also has a side project with his good friend and bassist Logan Kane, who appeared on Gré’s Closing Time Concert. Their band together is called ‘Outside World,’ and it’s primarily instrumental. Although they have yet to release anything, their musical talent is undeniable and we here at Gré are excited to witness their musical journey.

iThere are no comments

Okay, by request part 2 of some fun shots I got at @pappyandharriets show of @the_boxmasters_official! Such a great group of people, just all around good vibes. Shot with @leica_camera
As always it was a fun night @pappyandharriets, the show @the_boxmasters_official had great energy and of course I loved talking and meeting new people. I feel really fortunate to be able to live in this little community. @leicacamera
Another very musical night here in the high desert @giantrockmeetingroom tonight. Here’s a little sneak peek of some of the fun shots I got tonight. More to come soon. Thanks to all the amazing musicians who put this together (i may have missed some because I don’t have everyone’s IG 😭- but performers feel free to DM if you want to see more photos from the night - way too many post all!
Did a little more exploring last night in our “weird” desert community (that’s a good weird) and made a little stop @grnd.sqrl for a beer and some open mic. Always fun to see the characters that come out.
“Treat Me Right” @reddogpioneertown
A few more fun shots from last night at @pappyandharriets (you can see more on my personal account @kellysegre). Some great performance by @bradbyrd @summerdean and @thejessedaniel.
I’ve been slacking on film developing - mainly because it’s the busy season at my shop but we were able to sneak out to our favorite @pappyandharriets and catch @coheed show. Fun night, really awesome vibes as always. #filmisnotdead #pioneertown #livemusic #filmphotography #desertlife
Developing film on Sunday 😍 should be some good stuff of @mariakn__
Polaroids of @mariakn__ in Joshua Tree.
Sometimes you just have to enjoy the quiet moments, because they don’t happen very often @pappyandharriets.
Over the New Year explored the Mojave. Found some cool stuff and yep I found what I was looking for…including “The Joshua Tree” that’s not in Joshua Tree. #filmisnotdead
When @helloexistence came back home to visit we couldn’t resist sneaking in some film shots. Loving the vibe…

Begin typing your search above and press return to search. Press Esc to cancel.