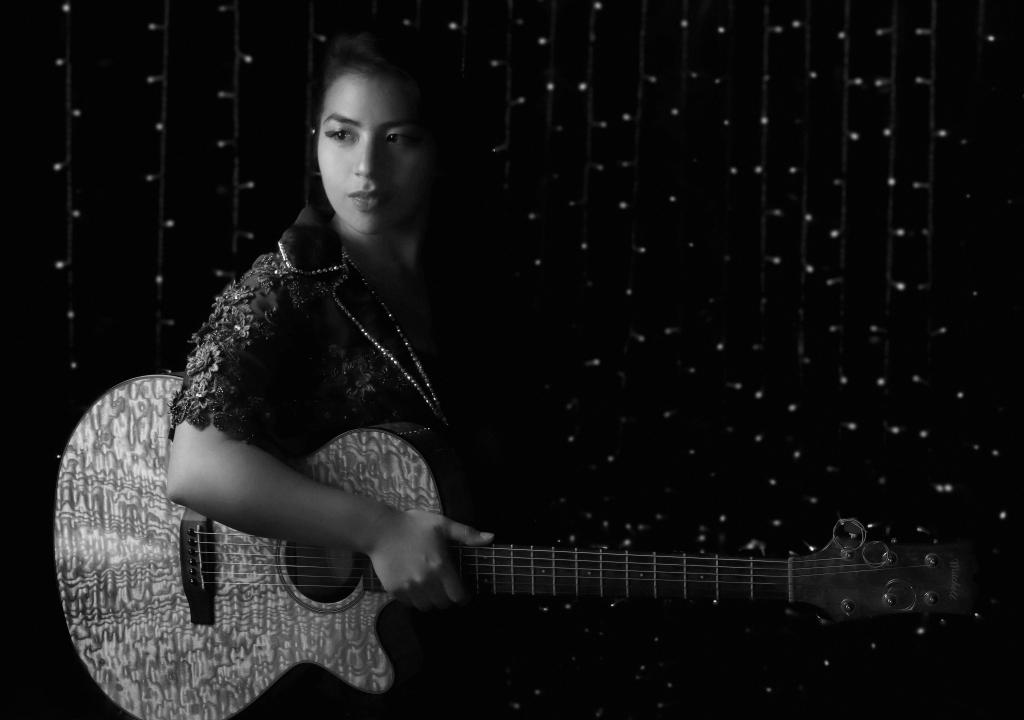 The first thing I thought when listening to Oto’s music was “Damn, this girl is fierce!” Upon her arrival I was met with someone who is kind hearted and perhaps a little timid at first, but once she started playing her whole demeanor changed, giving me more insight into her music and who she is. Her folky style and unique voice come together to create a melodic sound that can put you into a trance, while also exciting you and putting you on the edge of your seat. As I watched Oto perform I noticed how strong her stage presence is, almost as if while she is performing she is simply unstoppable. She is a woman of many trades, a Renaissance woman as some might say, as she hand made her purple getup, developing her own pattern and going from there.

Rachel Oto is truly a modern woman, using her voice to inspire others. When asked what the driving force behind her music was, she responded, saying, “At the heart of a lot of my music is the idea of pushing through adversity to get to where you want to be. The idea of taking the personal and making it universal is a guiding tenement of my songwriting.” She further explained that much of her life and identity have been shaped by struggle, making it easier to talk about overcoming obstacles and the things life throws at you, which it seems is what her music stands for. Her positive message not only brings up the idea of overcoming adversity, but also plays into the idea of turning bad into good, as her music is a place to put her struggles out in the open, rather than internalizing it.

Rachel Oto’s musical journey began when she was young. She mentioned she’s always loved to sing, but started to “dabble” in songwriting when she was just eleven years old. She goes on to say, “Then, when I was twelve I saw “Freaky Friday” and decided I wanted to learn guitar and start a garage band. Thankfully my parents were very supportive, and soon I was taking guitar lessons and holding rehearsals in the living room.” From there her musical style has shifted plenty of times, as she went from from Pop,  to Pop Punk, to Classic Rock and only then did she finally have chance encounters with the works of Woody Guthrie, Bob Dylan, and Johnny Cash, which brought her to the world of folk. Seemingly a perfect fit for Oto, her strings based sound is aided heavily by the fact that she’s been playing guitar for nearly 16 years, coming in handy and giving her that extra umph.

As the world slows down, Oto recognizes that the music business is right there along with it, but still has high hopes for the future and if it’s safe, would love to be touring and playing shows this time next year. She also would love for her music to be a part of the soundtrack for a TV show or movie around the same time she’d be touring. When it comes to things to look forward to, currently there is a single in the pipeline followed by an EP, which is due later this year, so make sure to tune in and watch out for any of Oto’s new releases, as I’m sure it will be a transcendental experience. Speaking of new releases, it is also important to note that Oto has just released a single called “Angel” along with a music video for it. The video is set in the desert landscape of Joshua Tree, CA and is overall a fun portrayal of a powerful woman defeating the bad guy, old western style, against a beautiful lyrical backdrop.

iThere are no comments

Still have lots of scans to share. These film shots are from mid pandemic when @hunter_la_salle decided to take a little trip to #pioneertown and get a few shots. It was a nice surprise to find these gems.
Slowly getting through all the rolls of films I had failed to develop the last 2 years…but it’s fun to find gems you forgot about. This was taken in Naples, Italy in September 2019 (I had way more rolls of film from Italy than I thought!) Can’t wait to be back soon!
Part 2 of some shots I got of @robynreneed this week exploring the desert. Right before the crazy storm came in.
Enjoying finding moments in my own backyard. The desert is a magical place for creatives. This is of @steviefromstlou at @giantrockmeetingroom right before we lost electricity for the night.
Last month we went and saw @thisispattismith at the infamous @pappyandharriets (which is a nice 2.5 miles from home). With my love of analog (vinyl obsession, aside) I’ve been bringing my film cameras everywhere - so look for more soon. This was a great night - super funny people watching and of course the music was amazing.
It’s a film developing day…so more to come from yesterday shoot with @robynreneed! Look for a photo dump soon of months / years of photos since I literally have dozens of rolls to develop.
Tomorrow’s project, a little behind 😂 just have to get some fixer.
Had a little fun in Joshua Tree and Pioneertown today with @xdanistk and @davevm
Coming soon…
20 years
Still going through older images to see if there are gems I missed. This one of @roarie_yum a few years back stood out to me. One thing I love about Roarie is we always get something new, even though we’ve literally have worked together a trillion times (although it’s been a few years 😭) I’m going to start digging more…I like this, it inspiring me for future work.
Every once in awhile I love to go through my hard drive to see if there are any photos from an shoot from the past I missed…so get ready for some photos I’ve never shared, but should of. 1st up @helloexistence from the shoot I did last year. Don’t know how I missed this one.

Begin typing your search above and press return to search. Press Esc to cancel.